“Space, the final frontier…” I heard these words on TV all my life. I’m a big fan of sci-fi shows and am thus a long-term believer in space travel. My only venue to trade this notion on Wall Street has so far been Virgin Galactic (NYSE:SPCE) stock. It is the only public company that will eventually take people to space. Therefore, the long-term thesis for SPCE stock is to own it.

Nevertheless, I always aim to find appropriate entry points so that I am not blindly chasing profit. Committing long-term is fine, but I prefer starting out green. There are levels that present better starting points regardless of time frames.

I’ve written positively about SPCE stock as often as I could. I admit that I haven’t been 100% bullish at every level, but I supported it when it mattered. Case in point, in June I was somewhat cautionary. My conclusion then was that I would rather wait for a lower entry point. Even though the stock rocketed higher — pun intended — it also came down hard afterwards. 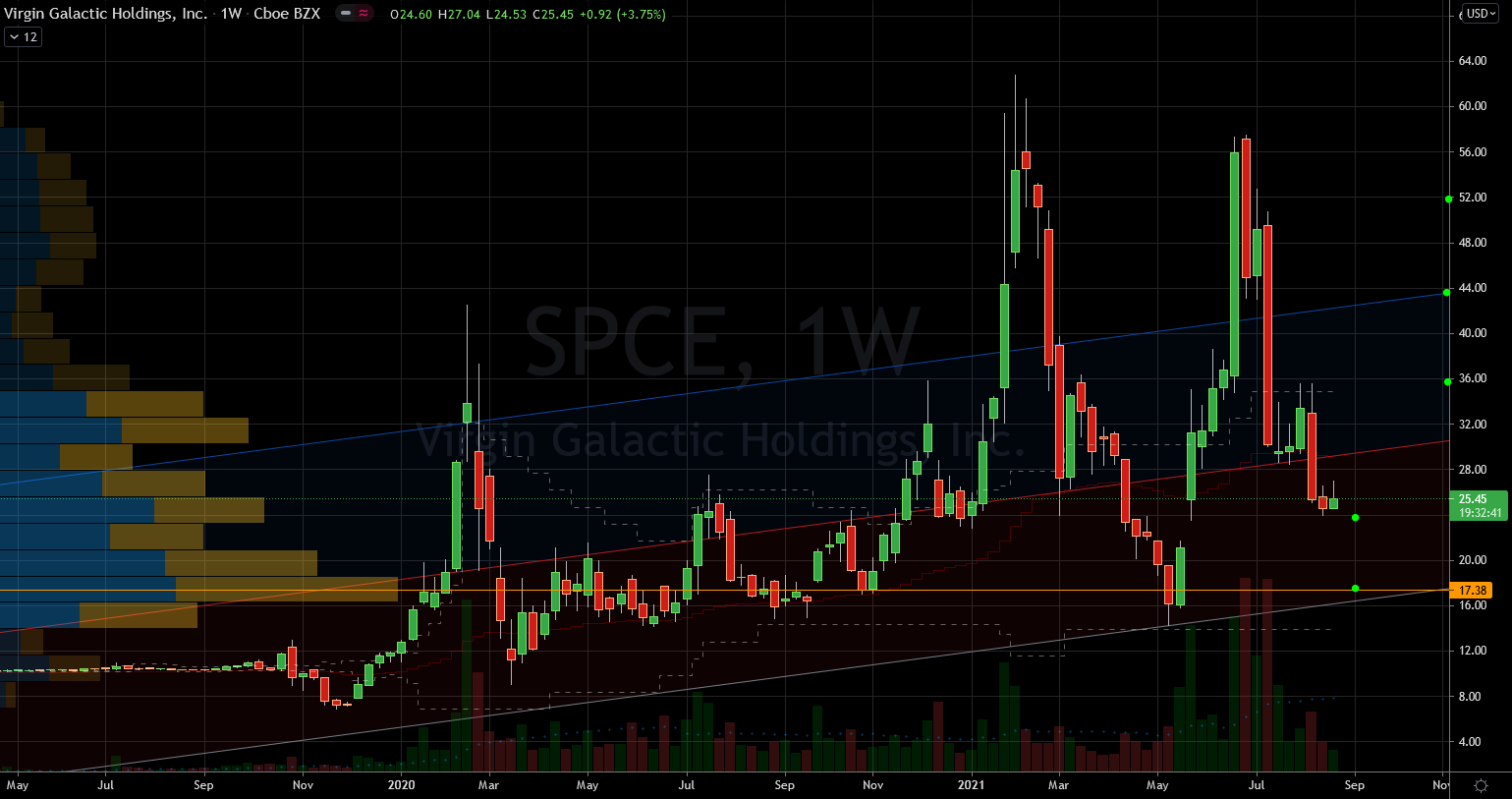 Now I have my wish, because the stock is about 25% lower than my most recent note. Hindsight is 20/20, as they say. But in this case, doing the right thing worked out in the end. Chasing runaway rallies often results in heartbreak.

This is where personal preference becomes a factor. I hate losing more than I hate missing out, so I resist the FOMO.

Fundamentally the stock price is expensive, but that is because it’s a bet on future successes. We don’t have actual commercial space travel yet, but we anticipate it is coming.

Recently, Virgin Galactic’s founder, billionaire Richard Branson, went on the company’s maiden space voyage. That’s as tangible as a progress report can get. Shorting the stock long-term became instantly wrong. SPCE stock near $20 makes sense even if it can go lower — especially if the entire market corrects a bit.

The indices are still near record levels as we approach the end of the stimulus program. The Federal Reserve is not likely to announce it now from Jackson Hole. But they will soon commit to when and how much they will taper.

Wall Street usually prices in risk way ahead of time and so far, investors are taking it in stride. I give those who are buying on the dips credit for bravery. I also assume they will continue doing that, unless we have a black swan event.

Going all-in at these altitudes is somewhat reckless. Even long-term investors should take their positions in tranches. This is the only way that would allow room for managing risk.

I also like to use options, where I can leave some room for error. For example, instead of buying 200 shares of SPCE stock, I could buy 100 and sell one put below. This way, half my position would already have leeway. Furthermore, the out-of-pocket expense is much smaller. Modern investors have new tools, and it is a mistake to ignore them.

Using options helps, but so can technical analysis. Since machines do most of the trading, thinking like them helps. They do not use sentiment to trade, they look for data. They review prior history and then execute code according to prior patterns. Therefore, ignoring chart data means staying blind to the biggest part of the market on purpose.

SPCE stock has support near $22 per share, and it extends all the way to $15. If for whatever reason it fails, it would create a disaster scenario.

Let me be clear — that would not be my assumption in such a case. In fact, I think that would make for a bullish entry point.

The more likely scenario is a long-term ascent with the markets that eventually brings the stock back to its all-time highs. Patience will pay out a good dividend in the end.

We don’t currently know what the demand for space travel will be. But I imagine it will be strong, much like it was for the first commercial flights.

3 Tech Stocks Getting Ready for a Major Breakout
Stocks making the biggest moves midday: GM, McDonald’s, UPS, Pulte, International Paper and more
7 EV Stocks That Can Really Go the Distance in 2023 and Beyond
3 Sorry Blue-Chip Stocks to Sell in February Before It’s Too Late
These 3 Sectors Are Ready to Explode Higher