Advanced Micro Devices (NASDAQ:AMD) stock is up 18% so far in 2021. If anything, AMD stock is now cheaper than it was before. 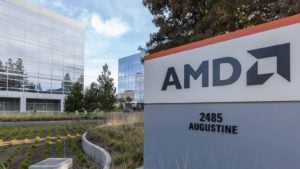 That’s because AMD continues to grow rapidly on both the top and bottom lines. Advanced Micro Devices saw $710 million of net income in its second quarter, or 58 cents per share, on revenue of $3.85 billion. Additionally, revenue was nearly double that of the previous year.

For investors, it was a case of selling the news after buying the rumor. Over the last five years, AMD is up over 1,300%. In 2015, the year after Lisa Su became CEO of AMD, you could have gotten this stock for around $2 per share. The stock opened on Aug. 26 at about $108, with a market capitalization of around $131 billion.

Since Su became CEO, AMD has had market leverage because it’s a chip designer, not a fabricator. Hardware has become software and software can carry enormous margins.

AMD has also benefitted from continuing weakness at Intel (NASDAQ:INTC), its long-time rival in PC chips. For example, the company’s Ryzen processors now run faster than Intel’s designs. AMD also has a graphics card line called Radeon. That line trails Nvidia (NASDAQ:NVDA) in performance, but with the ongoing chip shortage, AMD can still get its price.

Now, the fear is that Nvidia is becoming the big brother to AMD (a position that Intel once held), especially as it moves to compete in general processors by buying Arm Holdings from Softbank (OTCMKTS:SFTBY). NVDA investors have done twice as well as those who invested in AMD over the last year. Nvidia also carries a higher price-earnings (P/E) ratio than AMD.

Why Is AMD Cheap?

AMD and Intel were founded within a year of each other, in 1968 and 1969. For over 40 years, AMD was the proverbial little brother, doomed to trail its larger rival. Now this has changed. AMD notebook chips now outsell those of Intel. The company is expanding its lead with 3-D chips as well.

Advanced Micro Devices is expected to be the second-largest customer of Taiwan Semiconductor (NYSE:TSM) next year, trailing only Apple (NASDAQ:AAPL). Plus, TSM expects to make next-generation chips with circuit lines three nanometers (nm) apart next year — tech that AMD will get a lot of.

The company is also making its first big acquisition in years, agreeing to buy Xilinx (NASDAQ:XLNX) — a maker of programmable logic devices — for $35 billion. CEO Lisa Su expects that deal to close by the end of 2021.

Despite all of these pluses, though, there are several reasons why AMD stock remains cheap. Some long-time investors are taking profits. What’s more, the chip shortage is expected to ease in future years. Plus, Intel is making big noises about a comeback.

AMD has also used the shortage to prioritize higher-margin products, like notebook chips. Now, the fear is it may be unable to replicate current margins. During Q2, about 18% of AMD’s revenue hit the net income line.

And, while it’s cheaper than Nvidia, AMD is still not that cheap. Currently, it’s selling for 8.42 times forward revenue according to Seeking Alpha. Its forward P/E ratio of 43.49 is also nearly four times higher than Intel’s multiple.

The Bottom Line on AMD Stock

That all said, TV analyst Jim Cramer is telling viewers to ignore the worriers and buy AMD stock. I agree.

If you’re fearful of AMD’s current price, you can get in for less by buying Xilinx.  The regulatory hurdles here are much lower than with Nvidia’s purchase of Arm.

With chips going into everyday products, it’s hard to go wrong in the semiconductor space right now. Even if Intel gets its act together — and I think it will — there remains plenty of demand to go around.

Advanced Micro Devices has assured itself supplies for some leading-edge design in 2022. Given Nvidia’s valuation, buying AMD for some 10 times revenue is a bargain. So, if you’re just starting to buy semiconductor stocks and want faster profits, this is definitely a name you can buy.

On the date of publication, Dana Blankenhorn held long positions in NVDA, TSM, AAPL and INTC. The opinions expressed in this article are those of the writer, subject to the InvestorPlace.com Publishing Guidelines.

Dana Blankenhorn has been a financial journalist since 1978. His latest book is Technology’s Big Bang: Yesterday, Today and Tomorrow with Moore’s Law, essays on technology available at the Amazon Kindle store. Follow him on Twitter at @danablankenhorn.