Many AT&T (NYSE:T) investors may wonder whether it’s time to cash out, as the company is anticipated to cut its dividends. But I’m urging investors to rethink their stance, as there’s a very good reason behind the dividend cut, which could benefit investors after considering the capital gains versus dividend income tradeoff. In addition, investors need to consider that T stock already holds the seventh-highest dividend yield of all S&P 500 stocks. Even with a cut, is this really the time to seek new pastures?

Let me explain why I think AT&T is more of a buy than ever.

First of all, investors need to understand the tradeoff between a company paying dividends and using its net income for growth instead. When a company generates positive net income, it has two choices — use the capital to expand on the business or pay a dividend to its shareholders. 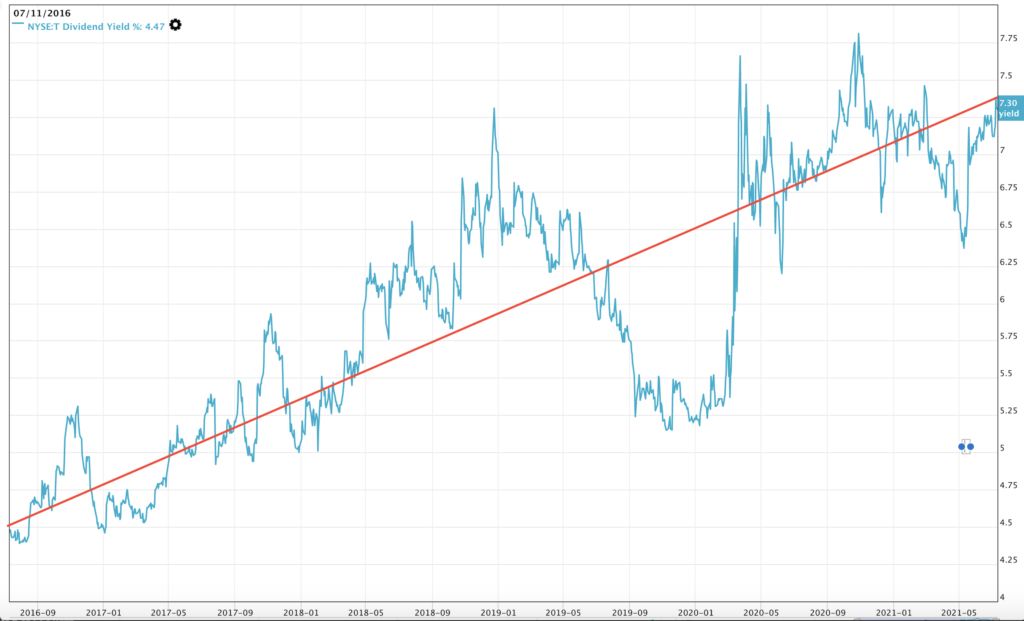 Based on the trajectory of the dividend yield and the 62.95% payout ratio, it’s apparent that AT&T has been focusing on returning value to shareholders in recent history. The scenario is set to change somewhat, but that’s because of the company’s change in strategy. AT&T has chosen to reignite growth by divesting its non-core businesses in a quest to strengthen its balance sheet. That should turn its finances into an armory for more robust core business growth.

AT&T isn’t underestimating the cost of its 5G push. It has thus emphasized the importance of continuing its impressive performance in its wireless mobility business. T stock revenues in that area are currently up by 10.4% year over year, primarily due to equipment sales growth.

The company recognizes that expanding its wireless operations while competing in 5G won’t only require once-off liquidity from divestments. It also needs to increase its retention ratio, which means fewer dividends.

I see the scenario as expansionary. AT&T has paid a significant amount in dividends over the past decade, but the stock price has subsequently declined by more than 30% over the past five years. This outcome of its change in strategy could result in investors experiencing capital gains while still receiving 95th-percentile dividends.

As mentioned previously, AT&T is divesting some of its businesses, and two headline transactions should be taken note of. The first is the spin-off of its media business where Discovery, Inc (NASDAQ:DISCA) will own 29% of the new separate entity, and the second is the majority sale of DirecTV to private equity firm TPG. The two deals are to provide AT&T with liquidity worth north of $50 billion.

Half of the $43 billion Discovery deal apparently includes debt securities, but if we take $21.5 billion in cash plus the $7.6 billion in cash from the DirecTV deal, we can estimate that the company’s cash position will increase by roughly $29.1 billion. If we consider the rest of the asset base, and the shares outstanding, a current fair value would be around $38 per share, which sees the stock trading at a discount if necessary adjustments are made.

From a relative standpoint, investors should note how low the multiples are compared to the index. The low multiples could be interpreted as a value trap if nothing fundamentally changed at the company, but they should come into play because of the restructuring, subsequently leading to price appreciation.

What I’m saying is, AT&T’s decrease in dividend payout isn’t the result of poor company performance. Instead, it is due to the company’s need to preserve more of its future earnings as it enters a renewed growth phase through 5G and wireless mobility.

On the date of publication, Steve Booyens did not hold any long or short positions in any of the securities mentioned. The opinions expressed in this article are those of the writer, subject to the InvestorPlace.com Publishing Guidelines.

Steve Booyens co-founded Pearl Gray Equity and Research in 2020 and has been responsible for equity research and PR ever since. Before founding the firm, Steve spent time working in various finance roles in London and South Africa, and his articles are published on various reputable web pages such as Seeking Alpha, Benzinga, Gurufocus, and Yahoo Finance. Steve’s content for InvestorPlace includes stock recommendations, with occasional articles on crowdfunding, cryptocurrency, and ESG.